
By Riverfront Plan
}
05 - 27 - 22
m
Riverfront News
In 1911, the Olmstead Brothers, sons of Fredrick Law Olmstead, the Father of Landscape Architecture, laid out Dayton’s System of Parks and Parkways. In that…
Read More

In 1911, the Olmstead Brothers, sons of Fredrick Law Olmstead, the Father of Landscape Architecture, laid out Dayton’s System of Parks and Parkways. In that design, the Olmstead Brothers envisioned ribbons of parks along our rivers. Motorists could drive the parks’ edge along the tree-lined streets with grandly planted medians, enjoying the shade, the flowers, and the view of the river. It was a beautiful vision to connect people to parks and rivers, perfectly suited for the bucolic pace of the early 1900s. 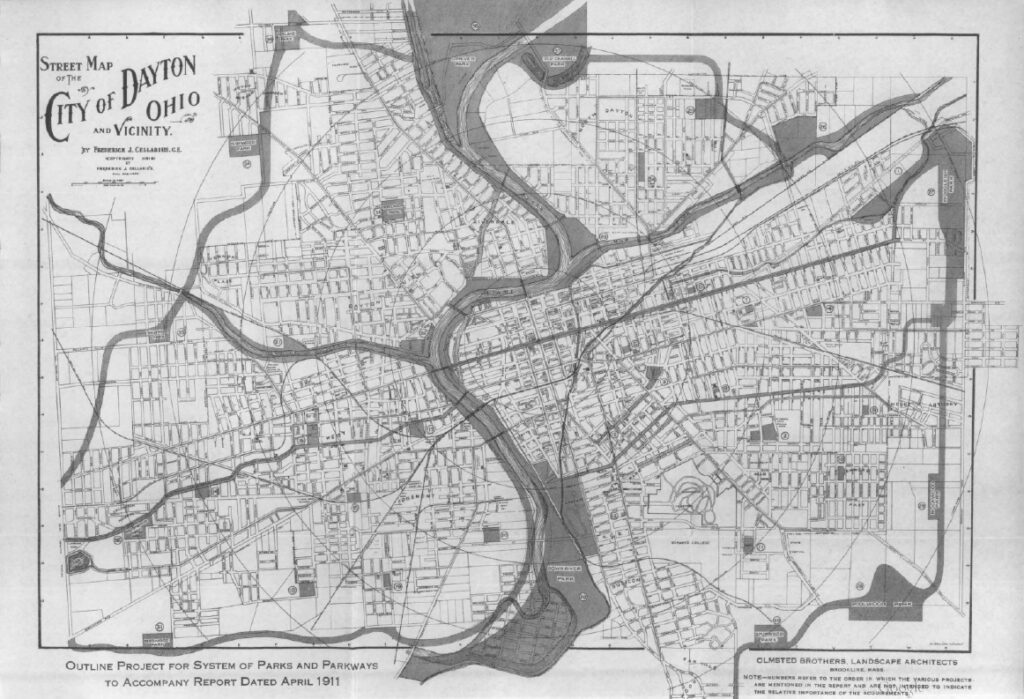 The vision was realized, and we still see it today. Riverside Drive along the Stillwater River, Riverview Avenue and Edwin C. Moses Boulevard along the Great Miami River, and James H. McGee Boulevard along the Wolf Creek are all wide, beautiful streets along our waterways. But life and automobiles have changed in the last 100 years. Cars don’t putter along at 25 miles per hour anymore. Instead, these boulevards have gotten wider, with four to five lanes of traffic, and cater to cars that careen at twice the speed.

For people and families who live in nearby neighborhoods, these streets are a nearly impenetrable barrier between their homes and our restorative parks and rivers. The streets aren’t safe to cross. The Dayton Riverfront Plan proposes to restore a strong connection between these neighborhoods and their rivers and parks. Evolved traffic engineering will allow us, where possible, to put these boulevards on “road diets.” The number of travel lanes can be reduced and while maintaining good traffic flow. Curbs can squeeze into parking lanes at intersections to further reduce the number of lanes pedestrians must cross. 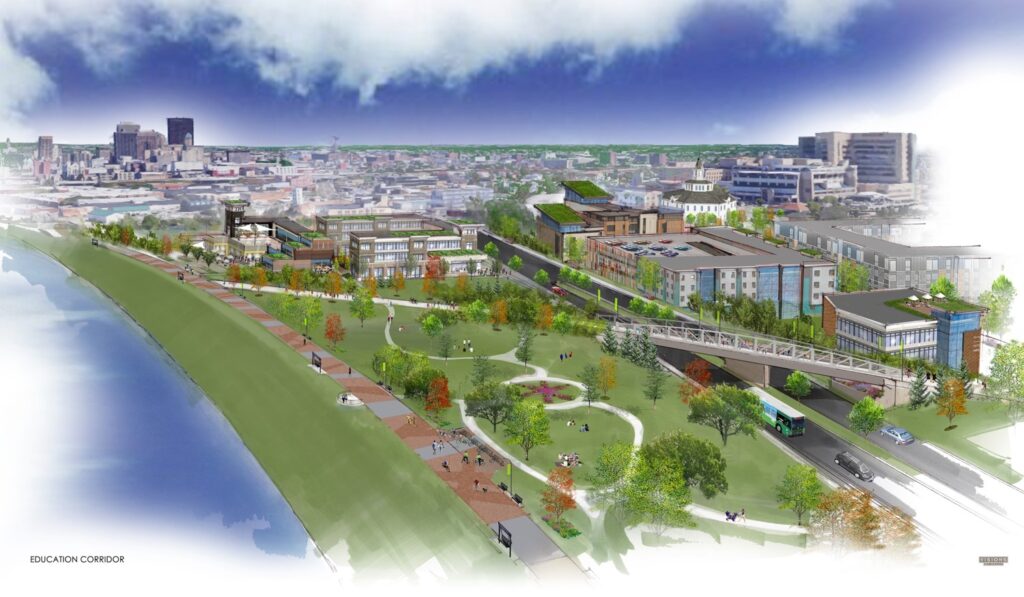 A second street concept of the Dayton Riverfront Plan that seeks to return people to their rivers is transforming little-used roads into pedestrian promenades. North Bend Boulevard between Kettering Field and the Great Miami River will be transformed into a pedestrian promenade creating the final link in the four-mile chain of parks from Wegerzyn Gardens MetroPark into downtown. Veterans Parkway at Stewart Street will become a pedestrian promenade connecting University of Dayton and onMain to downtown Dayton. Negley Place, between McIntosh Park and the Wolf Creek, will be removed and the levee adjacent to the street laid back to allow the park to blend down the slope to the confluence with the Great Miami River.

We’re striving to move the cars out of the way, and let people enjoy our rivers.

The vibrant redevelopment of downtown is spilling up, down, and over our rivers to Dayton’s neighborhoods along all points of the compass. The Dayton Riverfront Plan continues to spur on this evolution. Below is the long list of the Plan’s projects that have been...

Back in May, we wrote about how the 1911 Olmstead Brothers plan for Dayton imagined bucolic parkways along the rivers. The intent was to connect people to our waterways, but one hundred years later those parkways have turned into high speed, divided roadways. These...