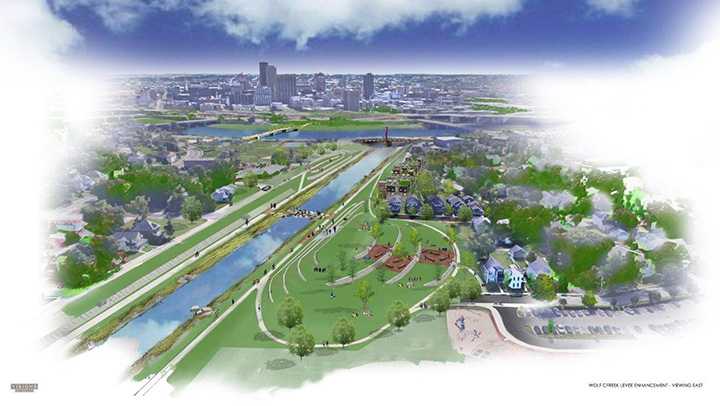 The Dayton Riverfront Plan (DRP) proposes over 90 projects within five corridors along 15 miles of waterway covering over 4,000 acres. How could we possibly get all of this done? With partnerships and perseverance. And it’s already happening. The Dayton Riverfront Plan’s nine partners—City of Dayton, Five Rivers MetroParks, Miami Conservancy District, along with CityWide Development Corporation, Downtown Dayton Partnership, Greater Dayton RTA, Miami Valley Regional Planning Commission, Montgomery County and the Land Bank—are collaborating to move forward strategically, ensuring that we take advantage of every opportunity to bring the vision to reality.

The partners have developed an implementation strategy with three principles:

Many projects in the DRP have already been implemented: the Tait Station low dam has been removed, opening river paddling from downtown to West Carrollton; Valley Street has been realigned to allow for a new riverfront park, Springfield Street has been reconstructed to add bike lanes. The Downtown Streetscape Design Guidelines and Corridor Plan has been completed as well. In addition, many projects are underway and nearly complete, including major infrastructure: the Third Street Bridge and Deeds Point Pedestrian Bridge; while others are funded: the bikeway through Sunrise MetroPark and protected bike lanes along Third Street in Wright Dunbar.

The vision for the Community Corridor along the Wolf Creek is to develop high quality recreation assets along either side of the creek, assets that will help revitalize the Third Street and Salem Avenue corridors as well as the surrounding neighborhoods. The partners are focusing efforts in many dimensions along the corridor. The City of Dayton, CityWide Development Corporation, and Five Rivers MetroParks have already assembled open space along significant lengths along both sides of the Wolf Creek. Wesleyan MetroPark has more than doubled in size and is continuing to grow. The Wolf Creek Bikeway will be relocated from the streets and extended to Hickorydale Park. As the Gem City Market opened this month along Salem Avenue and we continue to hear of investment along West Third Street, the image of a bright future for the West Dayton neighborhoods is taking shape.

Following the advice of Winston Churchill, the DRP made no small plans. Sunrise and Sunset parks with their adjoining Unity Bridge, the ARC (arts, recreation, and culture) Passage along the Culture Corridor’s Stillwater River into downtown, and the pedestrian promenade linking University of Dayton, OnMain, and Carillon Park to Sinclair College, the Arcade, and the rest of downtown will require years of collaborative effort—just like RiverScape did. The partners right now are planning, building coalitions of support, and fund-raising to bring these ambitious futures to reality.