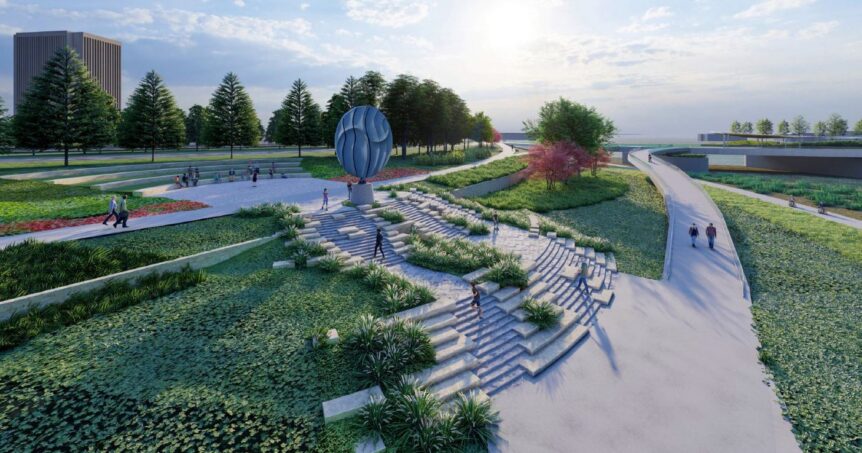 One of the most ambitious proposals of the Dayton Riverfront Plan is the transformation of Sunrise MetroPark and Sunset Park, parks complimenting each other on either side of the river west of downtown. The big idea is that this portion of the river, which has historically divided our segregated community between east and west, White and Black, evolves to become the place where we unite. These two parks, improved to be as beautiful as RiverScape MetroPark, will be connected by a pedestrian bridge that is far more than that—it’s a park-over-the-river, full with trees, lawn, and benches. The Unity Bridge, as it will be called, will symbolize Dayton’s coming together and resilience through major historical moments.

From the Dayton Art Institute, along Sunrise MetroPark to the Wolf Creek, across the Unity Bridge to Sunset Park, art and native horticulture will adorn the walkways and plazas, creating a gallery of experiences uniquely Dayton and promoting the bird and pollinator populations that already thrive along the river. Braided pathways up and down the levees will erase the separation between the city grid and the riverfront. Plazas at each of the parks will align across the river with the equinox, further connecting our urban environment to our natural environment. The Perch, a two-story structure will offer a classroom/meeting room, a deck overlooking the river, and a architectural flue to attract chimney swifts whose multitudes promise an acrobatic performance every night in the summer.

This visionary plan will be led by improvements to Sunrise MetroPark. As a first step in 2023 and 2024, the bikeway will be constructed through the park, connecting to the regional trail system and the bikeway at the river level. These projects will be funded by Ohio Department of Transportation grants through the Miami Valley Regional Planning Commission. The park’s improvement will be a key quality of life element injecting vibrancy into the redevelopment of the Third Street and Salem Avenue corridors, much like RiverScape helped stimulate the redevelopment currently occurring in downtown Dayton. The Gem City Market will be opening along Salem Avenue in the coming weeks, and several redevelopment plans have been proposed for Third Street that include retail shops, restaurants, and living spaces.

The revitalization of these two key corridors of West Dayton are at the core of the Dayton Riverfront Plan’s ambition: to create beautiful public spaces along the river that catalyze economic revitalization for the surrounding neighborhoods. We had hoped to unveil these plans late last winter as the pandemic hit. We promise to share the entire vision with you when we can all gather again. In the meantime, we’ll talk next month about how the Dayton Riverfront Plan will be implemented over the 25-year life of the vision.