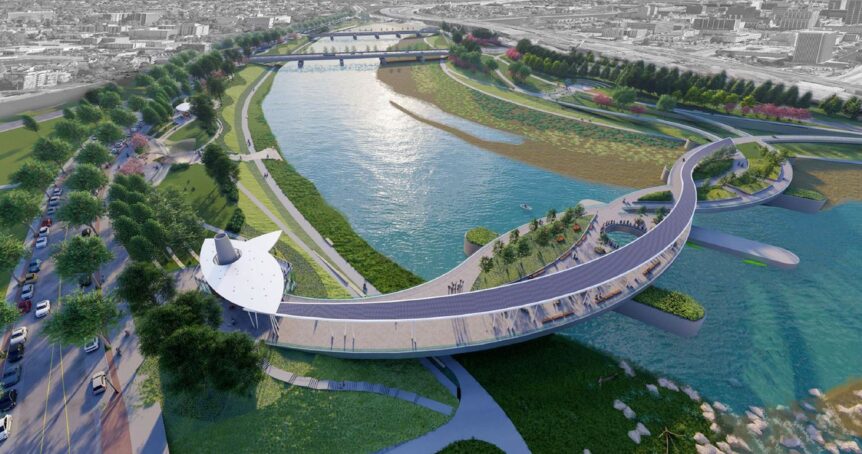 In the last year, despite the need to turn our attention to staying safe and helping our neighbors and community through the COVID-19 pandemic, the partners in the Dayton Riverfront Plan (Five Rivers MetroParks, City of Dayton, the Miami Conservancy District, and six other local agencies) were able to continue moving forward with much of the exciting work on the Dayton Riverfront Plan.

The most exciting element of the plan under construction is the Third Street Bridge, Dayton’s Peace Bridge, led by Montgomery County. The bridge will serve more than simply the cars crossing the river. The bridge will offer safe and inspiring passage for pedestrians and cyclists as well. Dayton’s African American heroes and their contributions to our history and culture will be highlighted in the structure, both on top of the bridge and at the bikeway below. Get a sneak preview of the bridge here. The Third Street Bridge, planned to open at the end of this year, will be the first step in realizing the Dayton Riverfront Plan’s goal of transforming the river from the place that has divided Dayton to the place where our community unites.

Other projects are being completed as well:

Just as the pandemic hit in March of last year, the Riverfront Plan partners were finalizing a presentation of the design of Sunrise/Sunset Park and the Park-over-the-River to the public. We had to postpone those events, but we await the opportunity to share the exciting evolution of these designs. Next month in the Dayton Riverfront Plan blog, we’ll share some of the detail, images, and strategies to implement this ambitious vision. Talk to you then.