Many of you may have seen the television interviews and the newspaper articles a few weeks ago about plans for Sunrise MetroPark and the Unity Bridge over the Great Miami River. In addition local TV coverage, reporting on the bridge can be found online at the Dayton Business Journal (paywall), Dayton Daily News, and Dayton 24/7 Now. Our community’s response to news about the riverfront shows how passionate and devoted Daytonians are to their rivers, and the vision for the Great Miami River in West Dayton is certainly exciting. Sunrise MetroPark aims to be a RiverScape MetroPark-quality park stretching from the Dayton Art Institute to Wolf Creek, with an equally beautiful park on the opposite downtown shore in Sunset Park. Those two parks will be connected by the Unity Bridge, a park-over-the-river symbolizing the role the river plays in bringing the people of Dayton together. The future looks very bright. 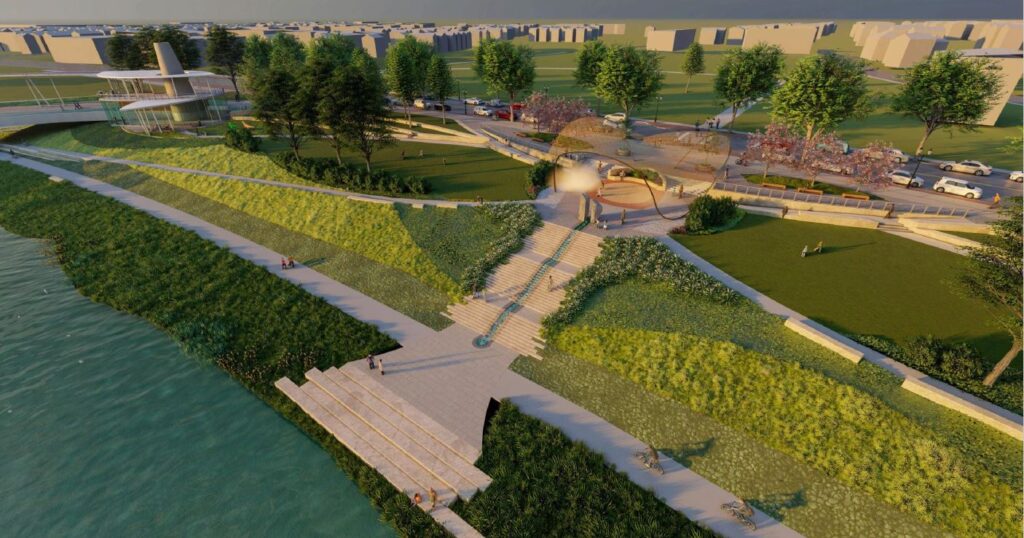 An important detail you may have missed from the media coverage is that the funding for this great vision is yet to be raised. The Dayton Riverfront Plan is a 20- to 30-year plan. RiverScape MetroPark took 20 years to complete, and the plan for Sunrise MetroPark and the Unity Bridge is even more ambitious. It will take time. We’ll seek funding from local, state and federal governments. It will require a great community effort, a campaign to engage foundations, the philanthropic community and Dayton’s citizens to become a part of this great vision.

The first phase of Sunrise MetroPark will be built this summer Centennial Overlook, funded by the Garden Club of Dayton in celebration of its 100th anniversary, will provide art and education in celebration of our thriving river. We’ll continue from there to build until we’re finished. When these parks are complete, they will belong to all of us, having risen from the ground by a community effort.

Spotlight on the Downtown Corridor

The Downtown Hub Corridor of the Dayton Riverfront Plan is just that: the hub of all other corridors in the plan. The center where they all converge. RiverScape MetroPark has shown that the public’s investment in that park, just less than $40 million, led to the...

Execution of the Dayton Riverfront Plan is well underway, and partners will be providing this regular report to the community on the plan’s progress.