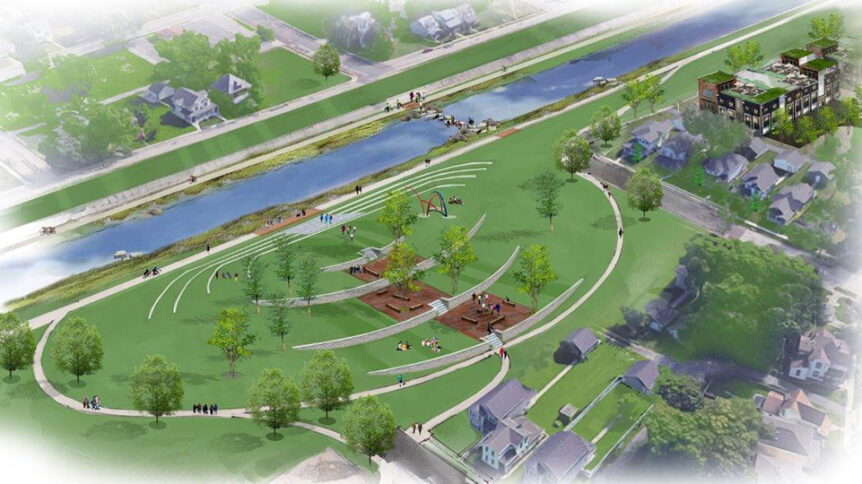 The Wolf Creek is Dayton’s most friendly waterway. This small, meandering stream winding through the dense neighborhoods west of downtown offers great fishing, ankle-deep wading, rock-skipping, and turtle-watching. Residents of Southern Dayton View, Westwood, Old Dayton, Cornell Height, Greenwich Village, and Wesleyan Hill are a walk away from this tree-canopied oasis. But many of those residents don’t visit the creek, others don’t even know the creek is there. Getting to the creek means braving streets too wide and traffic too fast. Once there, no paths exist, and the levees of our beloved flood control system are too steep to traverse.

The Dayton Riverfront Plan intends to transform the Wolf Creek into the premier recreation asset for thousands of surrounding residents, catalyzing economic redevelopment. The Wolf Creek area was dubbed the “Community Corridor” in the Plan to reflect the dense neighborhood character and its commercial arteries, Third Street and Salem Avenue.  The plan envisions this deeply human corridor as thriving, home-grown neighborhoods anchored by locally-owned small businesses. The Wolf Creek will offer parks, greenspace, bikeways on each side of the stream that provide opportunities for exercise and healthy lifestyles, with the ability to walk, run, bike, scooter, or skateboard throughout the corridor, connecting with downtown and neighboring corridors.

The transformation is already underway. The City of Dayton has relocated a segment of the Wolf Creek Bikeway along a beautiful stretch of the creek and is clearing additional areas to extend the creekside path all the way to Wesleyan MetroPark. The City has also partnered with Five Rivers MetroParks to extend the bikeway beyond Wesleyan to Hickorydale Park. MetroParks has acquired additional open space to nearly double the size of Wesleyan MetroPark, extending its reach to additional neighborhoods west of Gettysburg Avenue. The Miami Conservancy District is working with the City, CityWide Development Corporation, and others to explore opportunities to improve neighborhood connections to the creek

The community’s commercial corridors are showing signs of a bustling future. As Montgomery County nears completion of the beautiful Third Street Bridge this winter, new ventures in the Wright Dunbar area will also open for business. W. Social Tap and Table, a new food hall that will host multiple food and beverage vendors, held their groundbreaking in July. The Cornerstone Project proposes to redevelop three historic buildings near Broadway Street for mixed uses such as a restaurant and apartments. Along lower Salem Avenue, the Gem City Market has opened, relieving one of the largest food deserts in the nation. Activity is already stirring in the neighborhood of the Market, including the proposed redevelopment of Longfellow School. In addition, the City of Dayton is rebuilding lower Salem Avenue to ensure the quality of experience for vehicles, pedestrians, and cyclists as they visit these and future ventures.

The future of the Community Corridor along the Wolf Creek is bright, and the gears are already turning in both the public and private sectors to bring the Dayton Riverfront Plan’s vision for west Dayton to fruition. Next month, we’ll explore the Downtown Corridor, how it will contribute to the revitalization of west Dayton and how the ambitious vision of the downtown riverfront will unite our city in ways not seen in decades. Stay tuned.