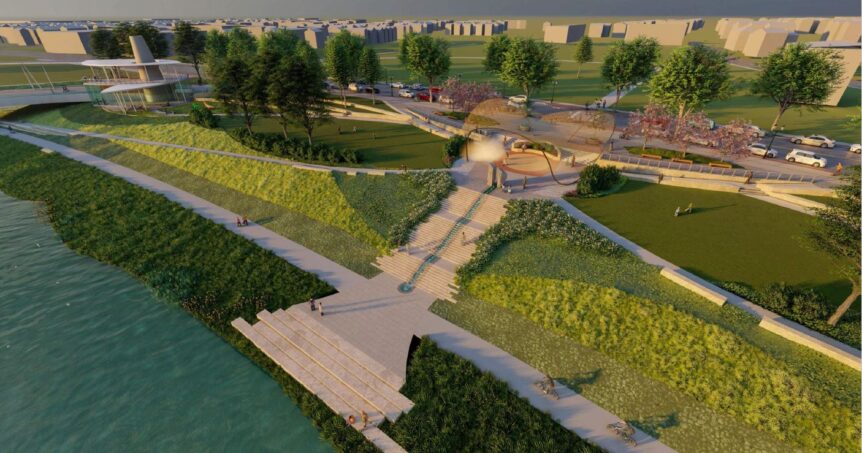 McIntosh Park is one of the most hoppin’ and exciting parks in Dayton. Sitting above the mouth of the Wolf Creek, McIntosh Park offers a spray park and playground for the kids, basketball courts, and a picnic shelter that fills the air with the sweet aroma of barbecue all summer long. The park is across Edwin C. Moses Boulevard from Sunrise MetroPark along the Great Miami River, and these two parks carry a vision to provide the neighborhoods west of downtown with beautiful park space, dynamic recreation amenities, and connections to the Wolf Creek, the river, and downtown. This nexus of parks will elevate the quality of life and spur community economic investment along the Third Street and Salem Avenue corridors.

Preliminary work has begun to strengthen the connections between the parks. The City of Dayton recently constructed a crosswalk and center island to allow pedestrians to cross the street more safely from one park to another. Next year, the Garden Club of Dayton will work with Five Rivers MetroParks to support the construction of a plaza at the corner of the First Street and Edwin C. Moses in Sunrise MetroPark. The plaza, celebrating the Garden Club’s centennial year, will be the keystone piece of the Gardens of Remembrance and Celebration, lovely native pollinator gardens along the park from West Belmonte Drive across First Street. The gardens will be accented with art and sculpture, creating a gallery of rich experiences overlooking the river.

In 2023, the City of Dayton will construct the pathway through the park from Third Street to the Monument Avenue Bridge. Soon after, MetroParks and the Miami Conservancy District will team up to complete the pathway on to the north, connecting with the existing path at the top of the levee below the Dayton Art Institute. These pieces of the puzzle for Sunrise and McIntosh parks will build the momentum toward the ambitious future of the park and for the Wolf Creek Corridor. Next month, we’ll take a closer look at that Community Corridor along the Wolf Creek and all the ways the partner agencies in the Dayton Riverfront Plan, the local community, and local entrepreneurs are transforming it.

And the Deeds Point Bridge is open! Thank you to all the local agencies who worked diligently to ensure that key connection in the hub of our nation’s largest trail network was back in service four years earlier than it typically would have been.